Best Mosquito Repellent for Your Yard

It’s spring and you may be shocked to learn that the world’s deadliest animal is invading your yard, home, schools, churches, sports fields, picnic areas, campgrounds, state parks, and basically, everywhere you go.

“What is this animal?” you may ask.  It’s not the shark, the snake, or the alligator. Believe it or not, it’s the mosquito!

This little critter, so small that it can strike before you see it, can make you very sick or even kill you. You may hear its buzz, but hearing its buzz is usually no defense.

What makes the killer mosquito so dangerous? 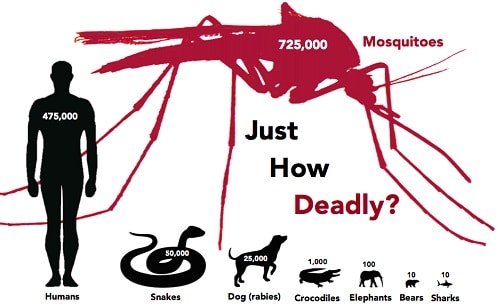 Notwithstanding their harmless-sounding name—Spanish for “little fly”—they carry life-ravaging diseases. The news is full of the Zika Virus scare. The worst disease by the numbers is malaria, which kills more than 600,000 people every year; another 200 million cases incapacitate people are sick for days at a time. It threatens half of the world’s population and causes billions of dollars in lost productivity annually. Other mosquito-borne diseases include dengue fever, yellow fever, and encephalitis.

There are more than 2,500 species of mosquito, and mosquitoes are found in every region of the world except Antarctica. During the peak breeding seasons, they outnumber every other animal on Earth, except termites and ants. And they affect population patterns on a grand scale: In many malarial zones, the disease drives people inland and away from the coast, where the climate is more welcoming to mosquitoes. Live near the water or have standing water on your property – beware!

Considering their impact, you might expect mosquitoes to get more attention than they do.

There are several things to consider when selecting a mosquito repellent for your lawn or outdoor use. Some of these are: do you have children and pets playing in your yard, do you have areas of standing water, do you live at a high altitude, is it rainy and windy, and do you want to use harsh chemicals?

Here are the salient points on the various methods of mosquito pest control taking these points into account.

An all-natural mosquito repellent for your yard should contain only natural ingredients that are laboratory proven to work.  It should not contain any dangerous chemicals. It must be safe for the entire family, pets, and the environment including waterways. It should work at any altitude and in windy regions.  And, it MUST KILL mosquitoes and other biting insects and REPEL (not attract) mosquitoes creating a dome of protection over the area where it is sprayed, ideally for up to 2 weeks.

Of course, this is our top recommendation as is exactly what Mosquito Magician – our Mosquito Killer Spray does for your lawn and garden.

Mosquito Repellent Zappers for Your Lawn

Mosquito Zappers are a hanging cage which requires electricity and could be called an electric mosquito killer.  An ultraviolet exuding light bulb attracts insects into a high voltage electrical wire mesh framework where the mosquitoes are fried.  This device requires electricity so it will need to be placed near an electrical outlet or you will need to run an extension cord.

While the zapper can kill mosquitoes, it also attracts many other insects, including beneficial ones like bees. We also question the idea of attracting more mosquitoes into your yard; the mosquito can just as easily stop and bite you and those in your yard on its way to the zapper.

Marketing of traps has created a great deal of interest in these new devices to attract mosquitos and then either trap or kill them. They can either use propane to make carbon dioxide, or use a CO2 cylinder. Additionally, traps may use an attractant such as Octenol (known as mushroom alcohol, a chemical that attracts biting insects such as mosquitoes -Wikipedia) or Lurex (a patent-pending mosquito attractant that mimics naturally occurring human skin scents or odors known to attract mosquitoes. This EPA-registered product is the only attractant developed for the Asian Tiger Mosquito.) Octenol is an attractant that makes the plume of CO2 seem even more like human breath.

While promoted as a mosquito repellent, traps are an attractant – the OPPOSITE of repellent.  And this attractant device mimics human breath.  So, the question is, “When the mosquitos are being attracted to your yard, patio, or pool, how do they know the difference between biting you, who is breathing, or going into the trap which is expelling CO2?” Odds they will prefer the real human to the machine imitating a human!

We leave this for you to draw your own conclusion.

Scented candles that contain citronella oil for repelling mosquitos in your yard may repel a certain number of mosquitoes in close range.  Usually, citronella oil blocks the scents from human bodies that mosquito radar detects making us invisible to them.

To be effective, you need to be close to the citronella oil candle with very little wind or breeze so the candle does not blow out. Stepping outside the safe zone could result in more bites.

A word of warning:  Regular scented candles, when burning, release carbon dioxide which is a strong attractant for almost all mosquito breeds. This causes the opposite effect of repelling.  The result is that you may have more mosquitoes coming into your yard and biting you.